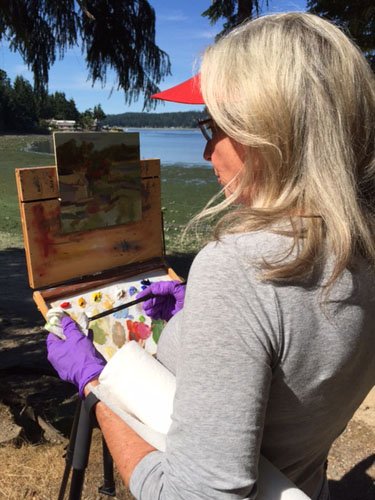 Josi Callan has devoted her life to the enhancement of the arts. As an artist, a museum director, a curator and an executive of numerous nonprofit organizations, she has acquired a multi-dimensional perspective on the creative process.

Callan was born in Great Britain and gained her enthusiasm for painting early on from her father who was an artist – she says he could do almost anything with a bit of paper, watercolors and ink. She began painting in her teens, continued through college and then turned to a career in the nonprofits. Residing in both the Northwest and Northeast, she now has more time to pursue her passion for making art. 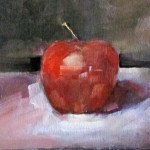 Callan’s strong attachment with nature and her surroundings has been a meaningful constant in her life. She is inspired by what she sees; a newly opened rose or peony, the deep magenta of a cactus flower, a disappearing trail, all present numerous possibilities. She aims to create a bit of magic with each painting.

Callan is a graduate of the California State University, Dominguez Hills and has studied art at The Art Students League of New York, The Seattle Artists League, Scottsdale Artists’ School, Sedona Arts Center, and with individual instructors.  Her paintings are represented in collections around the country. She is a juried member of Oil Painters of America, Arizona Arts Alliance, and has participated in many juried exhibitions, including Glendale Arts Council Fine Arts Competition 2015, Holland Art Gallery, Scottsdale, Arizona, Arizona Arts Alliance Holiday Exhibition 2014, SAS Beaux Arts 2012, 2014,  Best and Brightest, 2013,  2015, Northern Trust 2013, Phoenix, Arizona and  Art Intersection 2013, Gilbert, Arizona. In 2019 Callan received an Honorable Mention for her painting “Alden’s Road” from The Art Students League of New York. She is represented by Gallery Row, Gig Harbor, Washington.